IBHE has continued to collaborate with the Illinois public universities to provide an early look at fall enrollment. With its strong focus on equity as described in the new higher education strategic plan, A Thriving Illinois: Higher Education Paths to Equity, Sustainability, and Growth, IBHE has added enrollment data by race/ethnicity, as well as on more nuanced enrollment types, like dual credit and new undergraduate transfers. The following information on Illinois public universities complements the IBHE Preliminary Fall Enrollment Report on all degree-granting institutions and the IBHE report on enrollment and migration patterns of recent Illinois high school graduates.

For the first time, year-over-year retention rates among the previous fall’s freshmen are included in this report.

¹ For all of the national comparions, we used the following: National Student Clearinghouse Research Center. (November, 2021). COVID 19- Stay Informed with the Latest Enrollment Information. https://nscresearchcenter.org/stay-informed/

As shown in Figure 1, in fall of 2021, there was a 1.2% increase in total enrollment relative to fall of 2020- 21, equating to over 2,100 additional Illinois public university students. The pattern was similar to fall 2020 in which undergraduate enrollment was slightly down, but graduate and professional enrollment increased from the prior year. 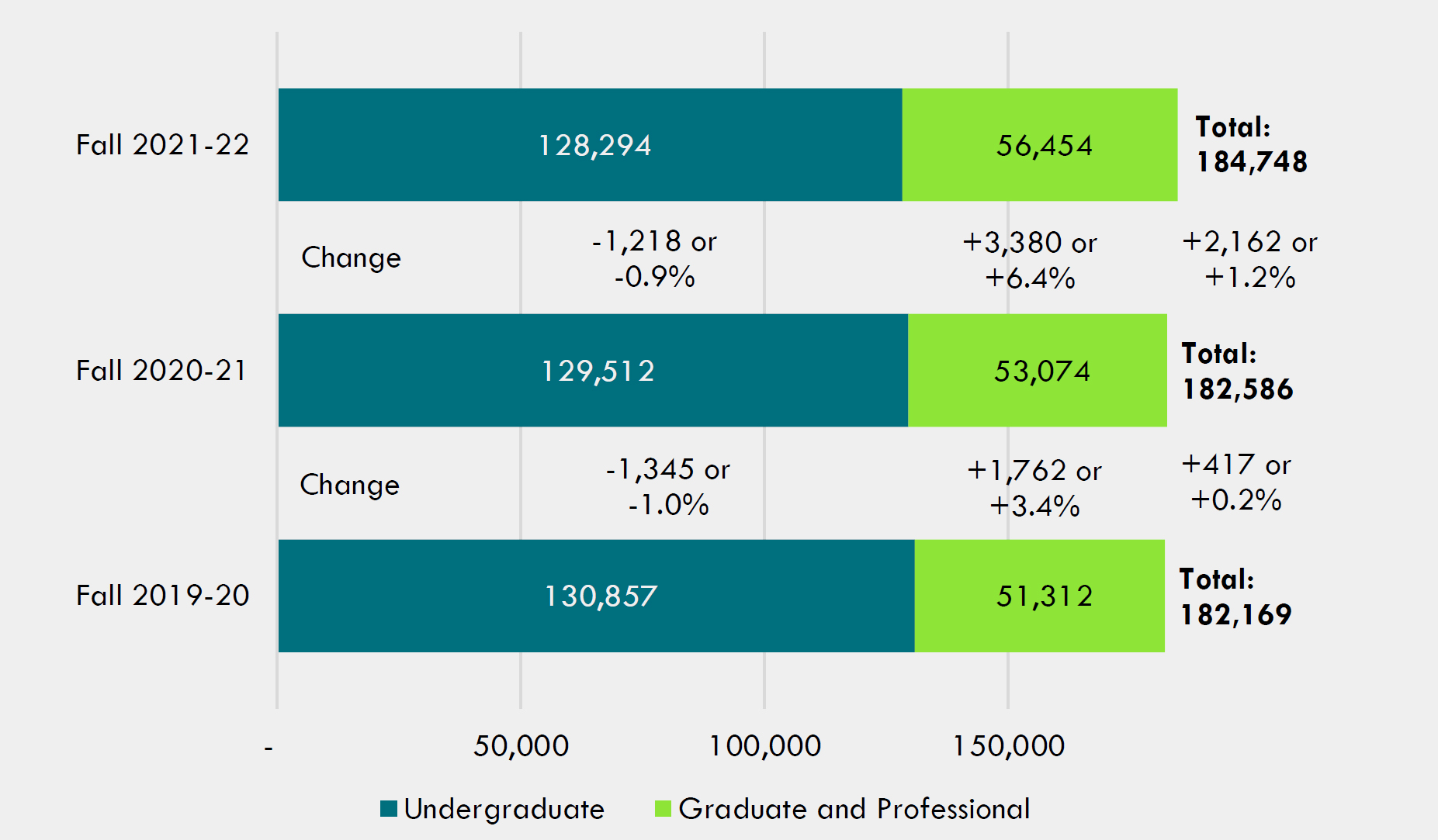 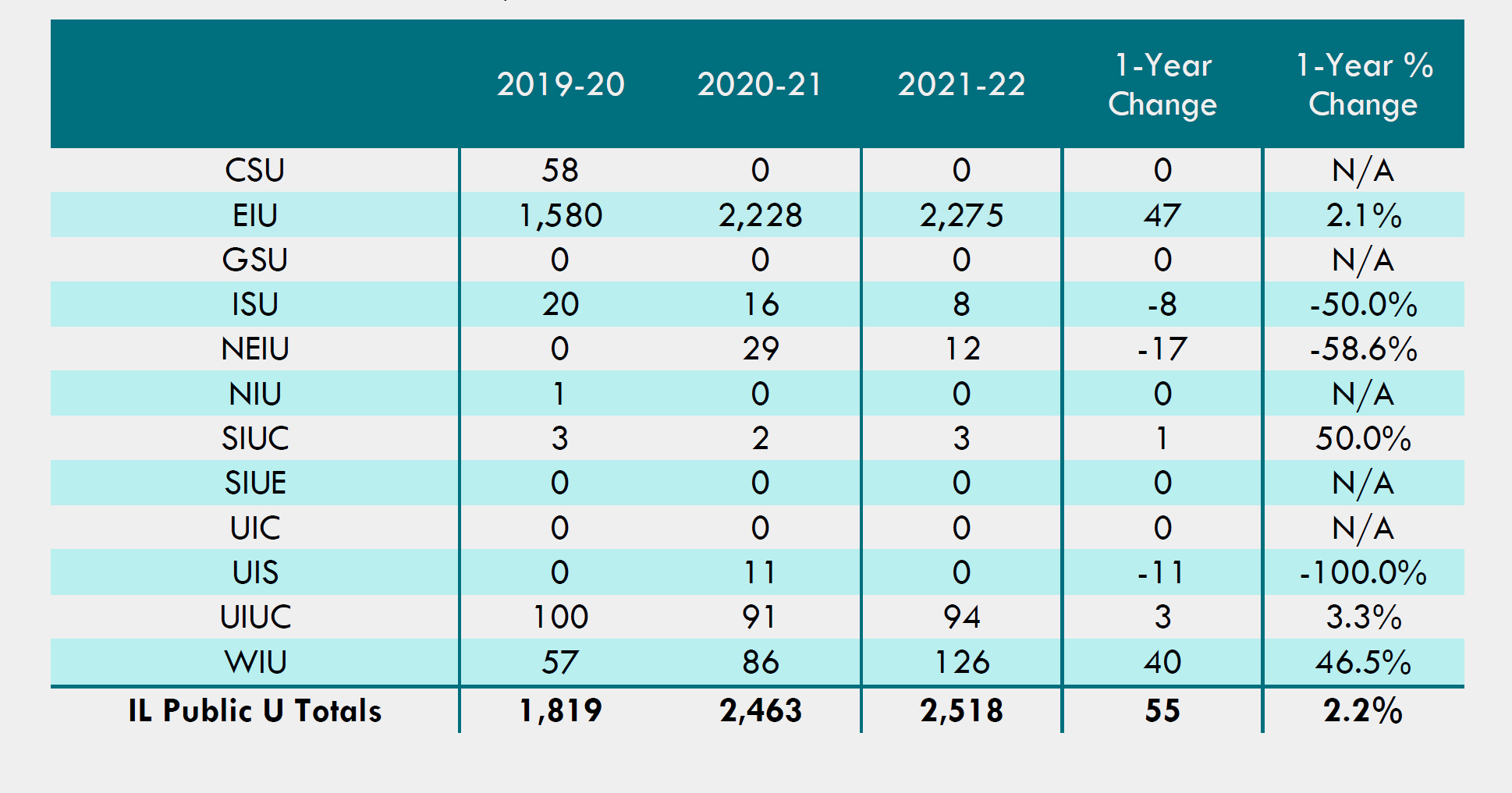 As shown in Table 3, compared to the fall semester of last year, 7 out of the 12 public universities experienced growth in the number of first-time full-time undergraduates or incoming freshmen. UIUC had the largest year-over-year growth in the number of freshmen at 799 (+10.7%). UIC had the second largest number of additional freshmen (+567) a growth of +16.4%. SIUE also experienced a large increase in freshmen enrollment (+427) and at 29.3%, had the highest percentage growth relative to last year. Three institutions experienced double digit percentage declines in new freshmen.

Graduate and Undergraduate Enrollment Summary. As shown in Table 6, total enrollment increased by 1.2%, beating the national pattern, which showed a decrease of -2.6% enrollment across all institutons. 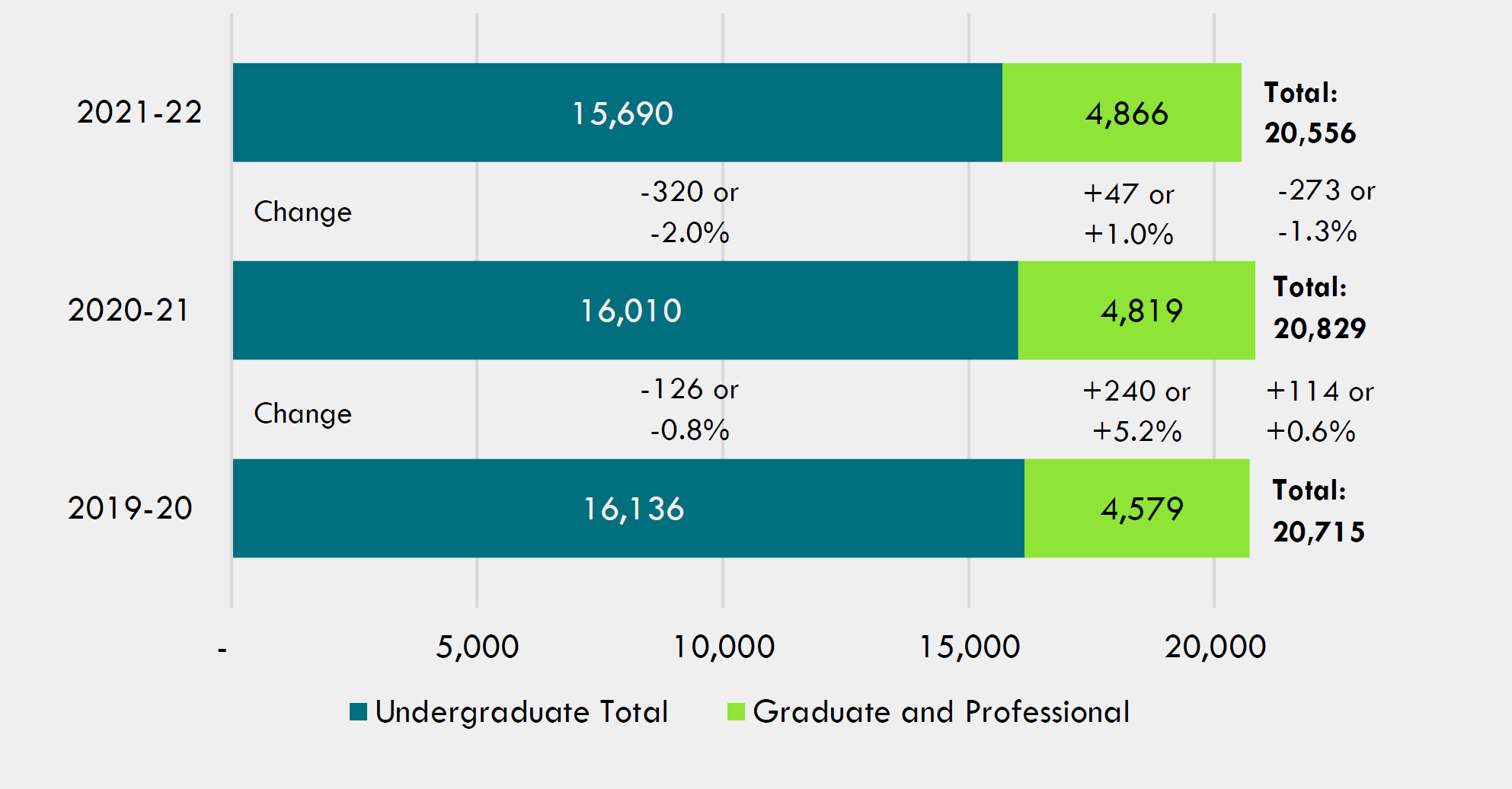 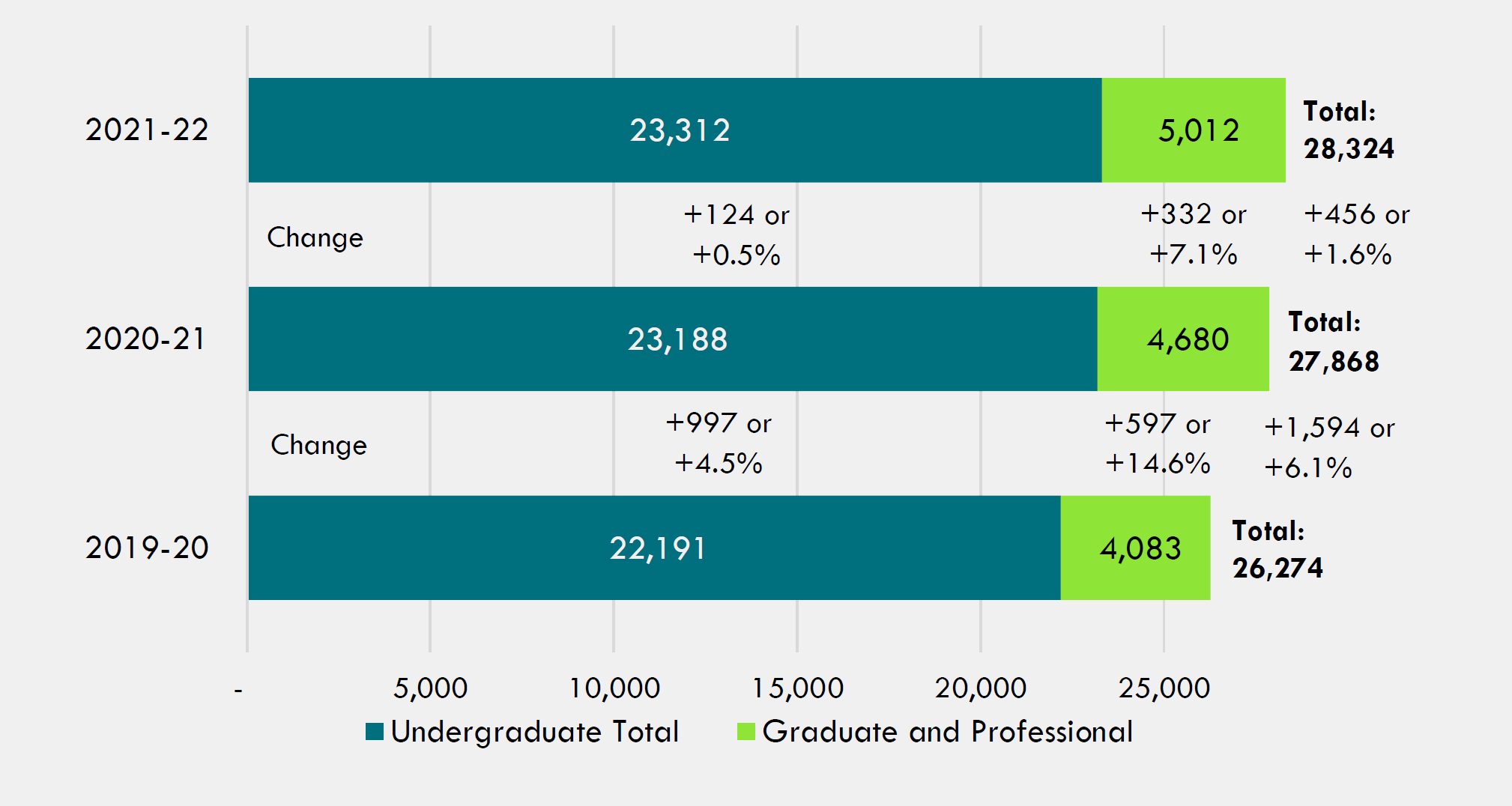 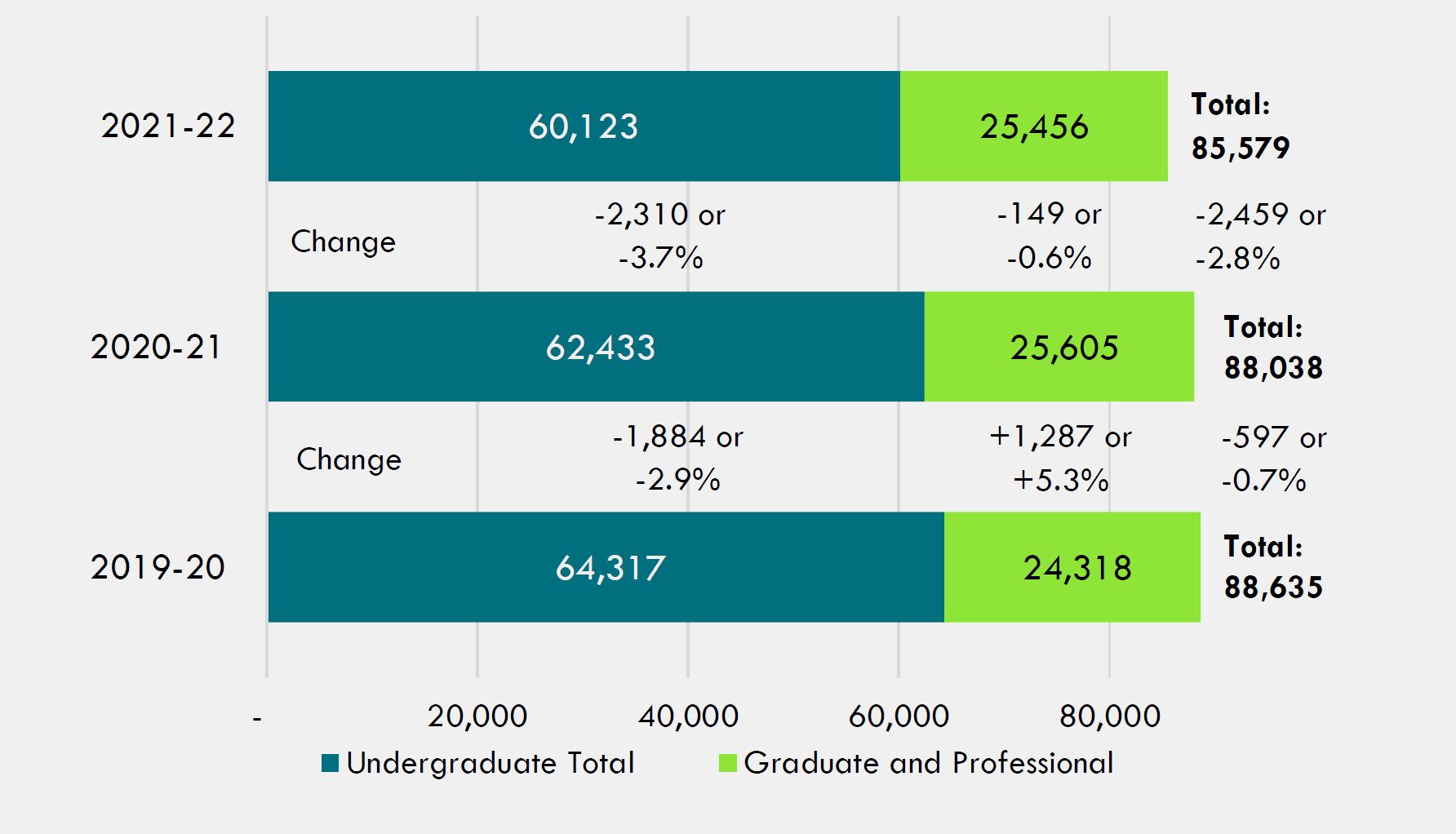 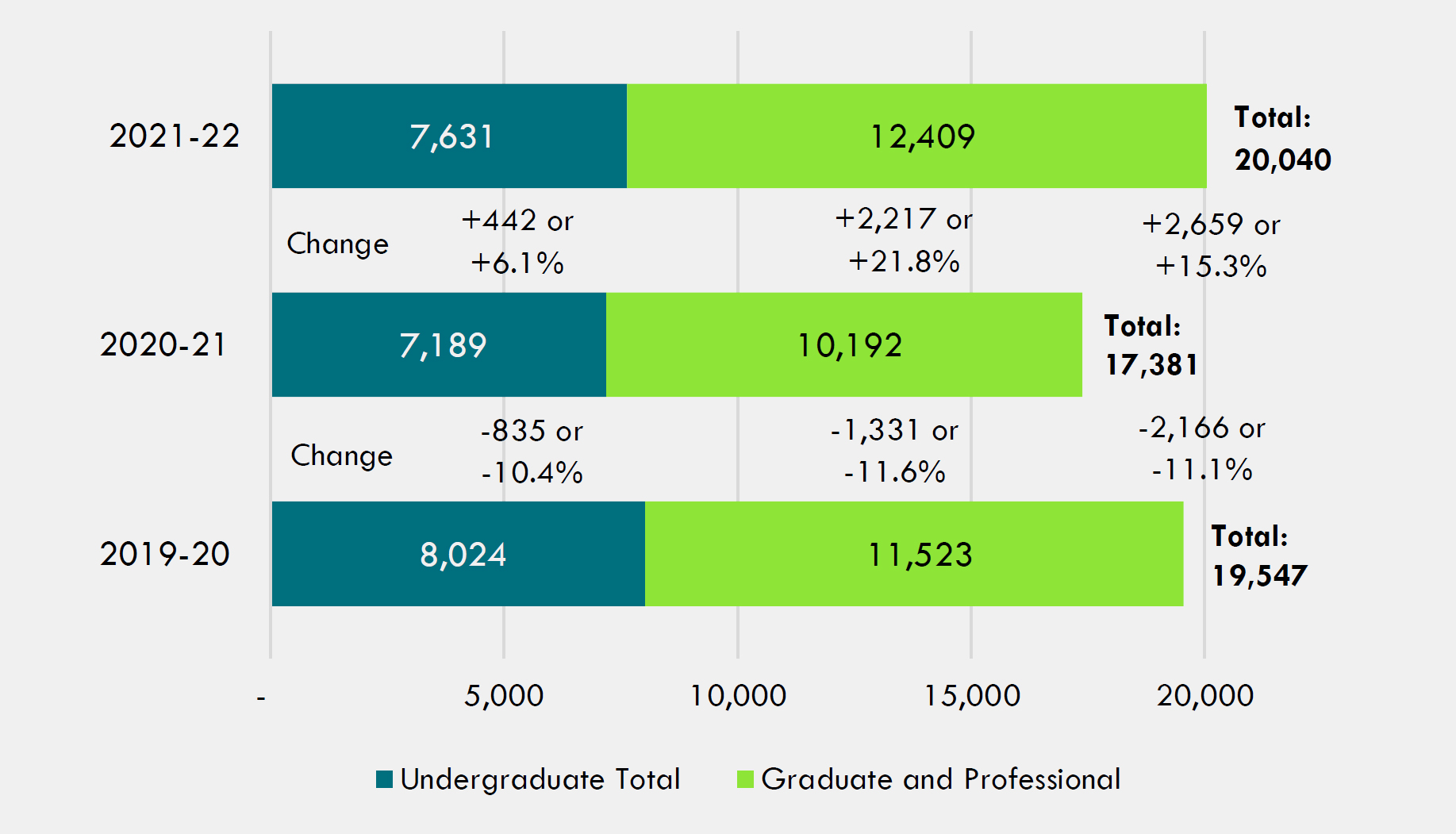 Fall to Fall Retention by Race/Ethnicity. As shown in Figure 6, more than eight out of every ten (81.7%) new freshmen at Illinois public universities who were enrolled in the fall of AY 2020-21 were still enrolled in the fall semester of AY2021-22. However, gaps emerged when retention rates were disaggregated by race/ethnicity. A retention gap of nearly 20 percentage points was evident between African American undergraduates (65.5%) and their white peers (85.6%). The retention gap between Latinx undergraduates and their white counterparts was smaller at around seven percentage points. After Asian undergraduates (93.4%), international students had the second-highest rate (87.9%) of retention among all groups. American Indian and Alaska Native undergraduate students experienced the lowest retention rates at 63.6%. 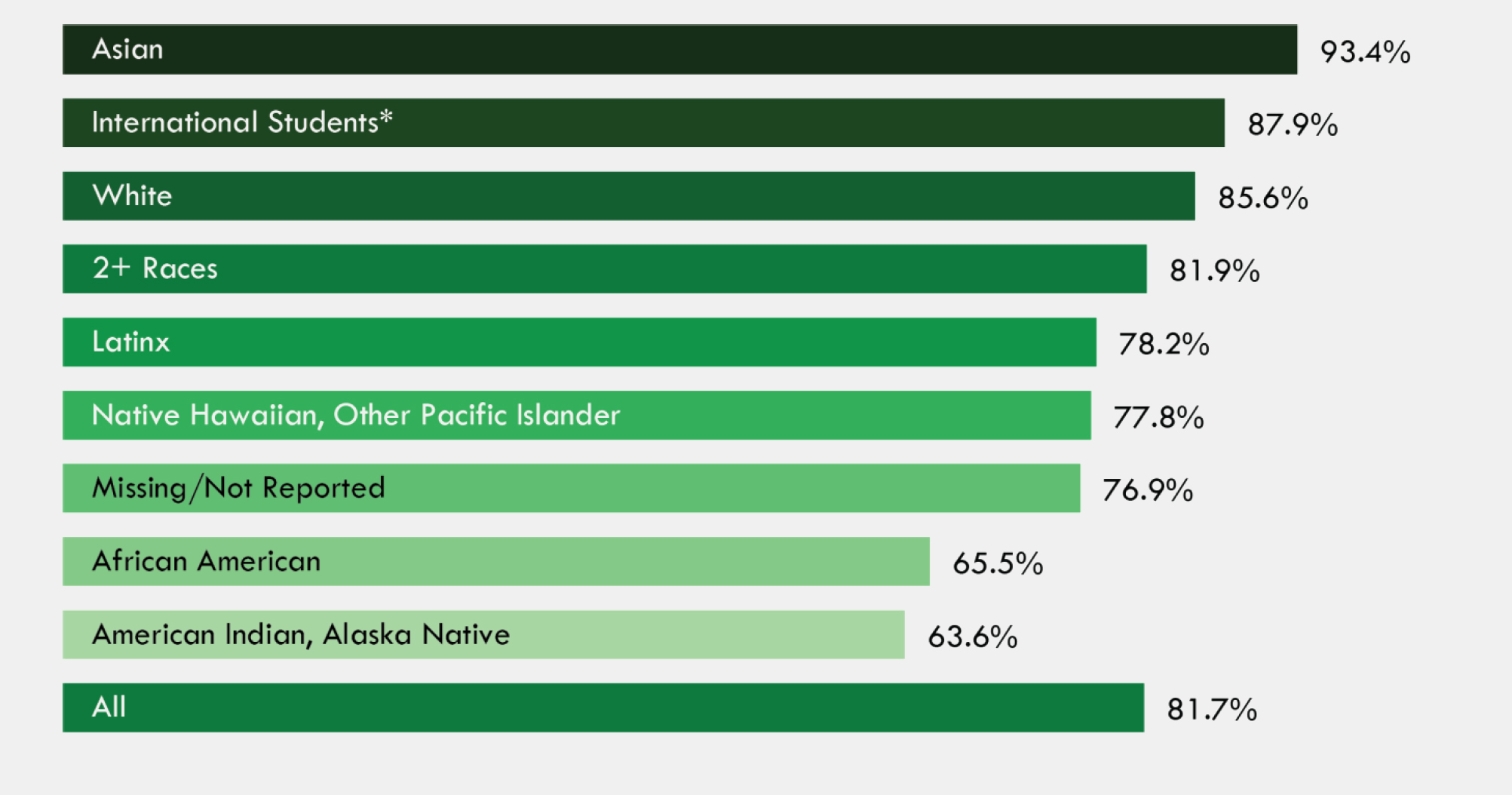 *A person who is not a citizen or national of the United States and who is in this country on a visa or temporary basis.

Fall to Fall Freshmen Retention. As shown in Figure 7, there was variation across the twelve Illinois public universities in terms of fall to fall retention for new freshmen from fall of academic year 2020-21. UIUC had the highest fall to fall retention rate at 93.5%, followed by ISU at 83.1%, while CSU and GSU had the lowest rates at 40.3% and 48.5%, respectively. 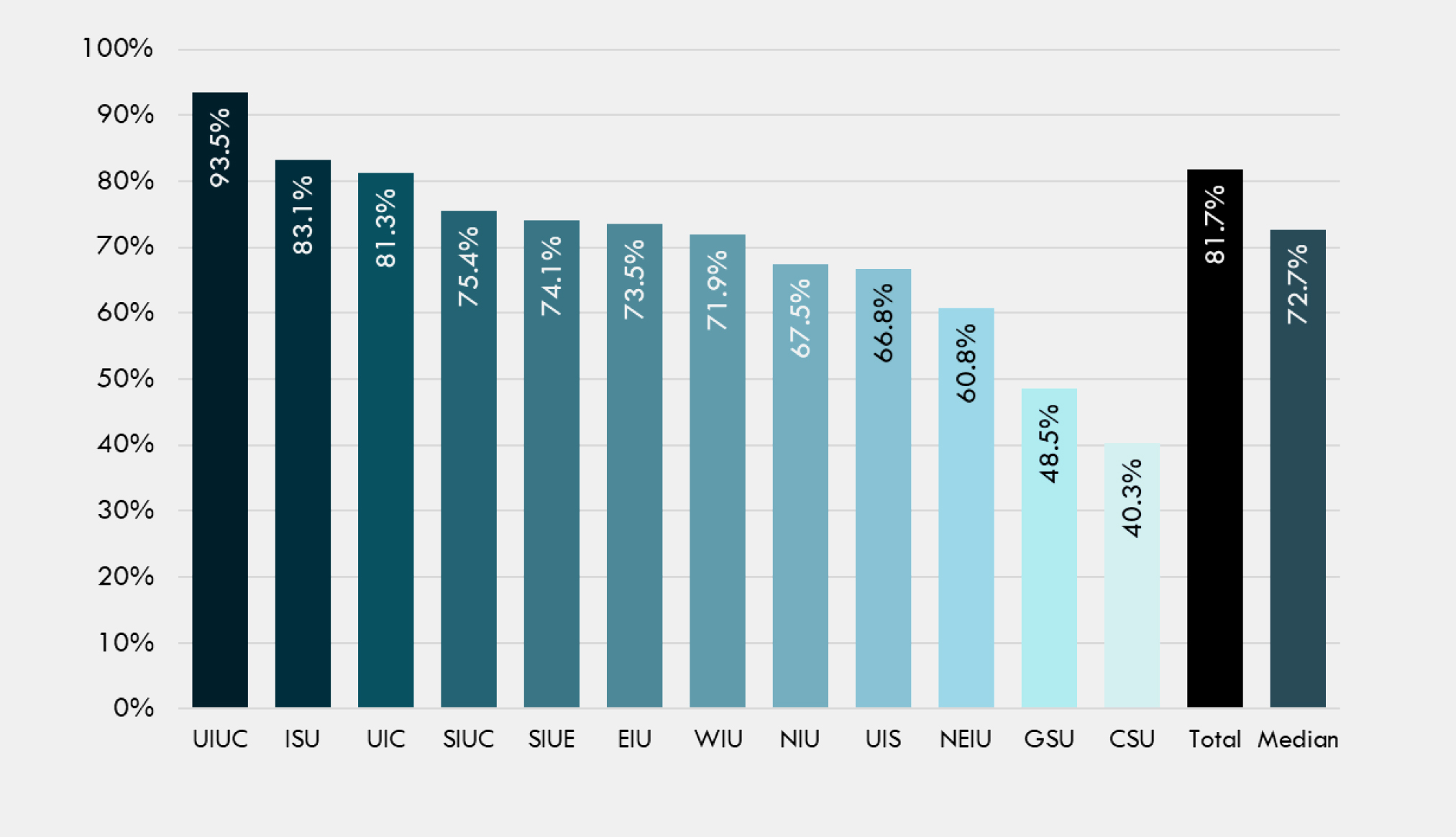 Enrollment by Race/Ethnicity and Gender

Asian: Asian undergraduate enrollment was up +5.5% at Illinois public universities, with females experiencing a slightly larger increase (6.4%) compared with males (4.8%). The public universities experienced particularly large annual growth in the number of Asian freshmen (+21.7%). There was a large increase in the number of Asian female transfer students (+20.8%), but the Asian male transfer students decreased at a rate of -12.1%.

Latinx: There was a slight increase in Latinx undergraduate enrollments at Illinois public universities (+0.5%), with the number of Latinx females increasing slightly (1.5%) and Latinx males decreasing slightly (-0.7%). The increase in Latinx freshmen equated to 4.6% growth year over year with larger growth in freshmen among Latinx females (+6.0%) compared to Latinx males (+2.7%). The growth in new Latinx transfer students was 4.6% and Latinx males and females experienced the same growth at Illinois public universities.

White: White students experienced enrollment declines across nearly across all of the enrollment types and gender groups except for freshmen (+1.3%) which was largely driven by the increase in male freshmen (+3.3%); and male transers (0.3%).

International: International students had year over year enrollment increases across all enrollment types and for both genders with the exception of new male transfer students (-0.5%) and even that change was fairly small.

Figure 8: Change in Headcount Enrollments at Illinois Public
Universities from 2020-21 to 2021-22 Male 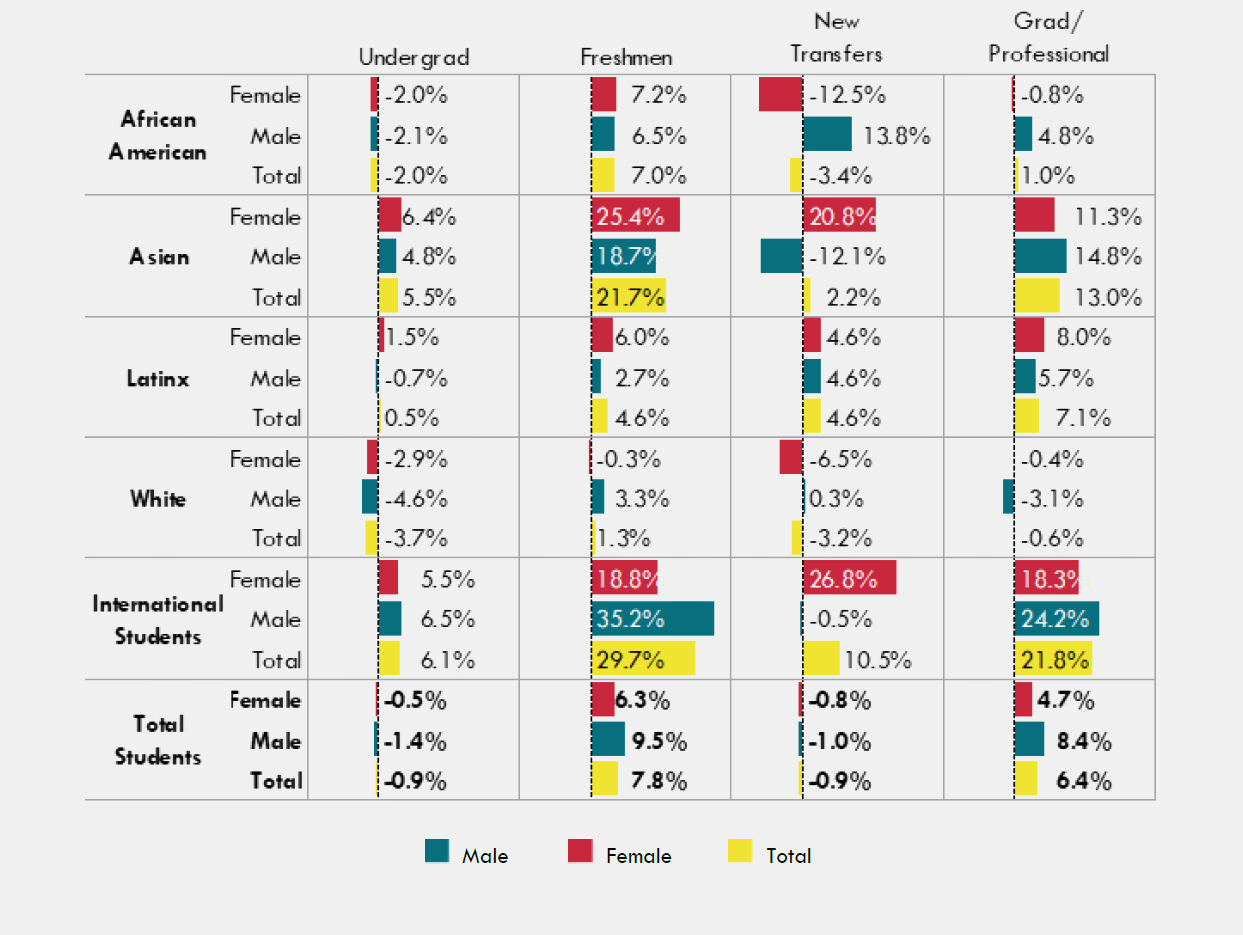