Each year, IBHE issues a “first look” at Fall enrollment. In light of the COVID-19 pandemic and IBHE’s focus on equity, IBHE collaborated with the Illinois public universities to collect enrollment information for academic year 2020-21 with a first-ever early look at equity . In addition to providing information on some of the more nuanced enrollment types, like dual credit and new undergraduate transfers, the interaction of race/ethnicity and gender specific to fall enrollment is also included in the report.

As shown in Figure 1, when undergraduate and graduate/professional enrollments are combined, there was a marginal increase in total enrollment relative to fall of academic year 2019-20. Illinois public universities enrolled 417 more students which equated to an increase of 0.2%. However, there was variation by degree level.

1
This was done through an enhancement of IBHE’s fall enrollment I survey. This information has been traditionally referred to as IBHE preliminary fall enrollments. Fall enrollment is considered final once student-level records are collected and processed for inclusion is IBHE public-facing data tools. IBHE leveraged its component of the Illinois Longitudinal Data System to create parallel baseline information for AY2019-20 to examine the main pipelines of new students year over year, and when possible disaggregated the information by race/ethnicity and gender. The enrollment information from AY2019-20 is considered final, but it should be noted that at times the information can be updated when definitional alignment issues are identified.

Table 1: Combined Undergraduate and Graduate Enrollment (based on FTE)

The relatively large overall declines in two of the main pipelines of new undergraduates at Illinois public universities along with the small net decline demonstrated how the large expansion of dual credit enrollment helped to moderate the overall loss of undergraduate students, despite being a fairly small proportion of overall undergraduate enrollment (1.9% in 2020-21). Dual credit is when academically qualified high school students enroll in courses through formal arrangements between colleges and high schools and receive both high school and college credit. Dual enrollment is typically less formal and involves a high school student taking a college class without necessarily receiving high school credit. Relative to 2019-20, there were 644 additional dual credit students enrolled, an increase of 35.4%.

In the future, this report will also include more detailed information on part-time undergraduates to better reflect the varying missions of the Illinois public universities. Such students, along with the non-degree seeking undergraduates that fall outside of the dual-credit distinction were included in the ‘All Other Undergraduates’ category.

Latinx Enrollments. Consistent with recent trends, overall Latinx enrollment at Illinois public universities increased by 6.1%, or nearly 1,600 students from fall of AY2019-20. Latinx undergraduate enrollment increased by 4.5%. As illustrated in Figure 3, at the graduate/professional level, Latinx students experienced an increase of 14.6% or 597 students at Illinois public universities (4,083 to 4,680).

Figure 6 provides a detailed comparison of enrollment by race/ethnicity and gender in several enrollment categories.

Latinx Enrollments. Overall undergraduate enrollment increased for Latinx students, despite declines among new freshmen and new transfer students. The change from 2019-20 for first-time full-time undergraduate enrollment was fairly similar among Latinx males (-7.2%) and females (-8.6%). However, Latinx males experienced a decline in new transfer enrollments that was more than two times greater than their female peers (-7.1% to -3.5%).

At the graduate/professional level, public universities enrolled higher numbers of Latinx males (11.4%) and females (16.8%) when compared to fall of academic year 2019-20.

White Enrollments. Year-over-year enrollment patterns of white undergraduates differed for males and females. Undergraduate enrollment among white females was relatively flat from year to year, while there were comparatively larger declines of white males overall (-5.7%), among first-time full-time undergraduates (-12.3%), and with new full-time transfers (-9.9%).

Figure 6: Change in Headcount Enrollments at Illinois Public Universities by Enrollment Type:
Change from 2019-20 to 2020-21 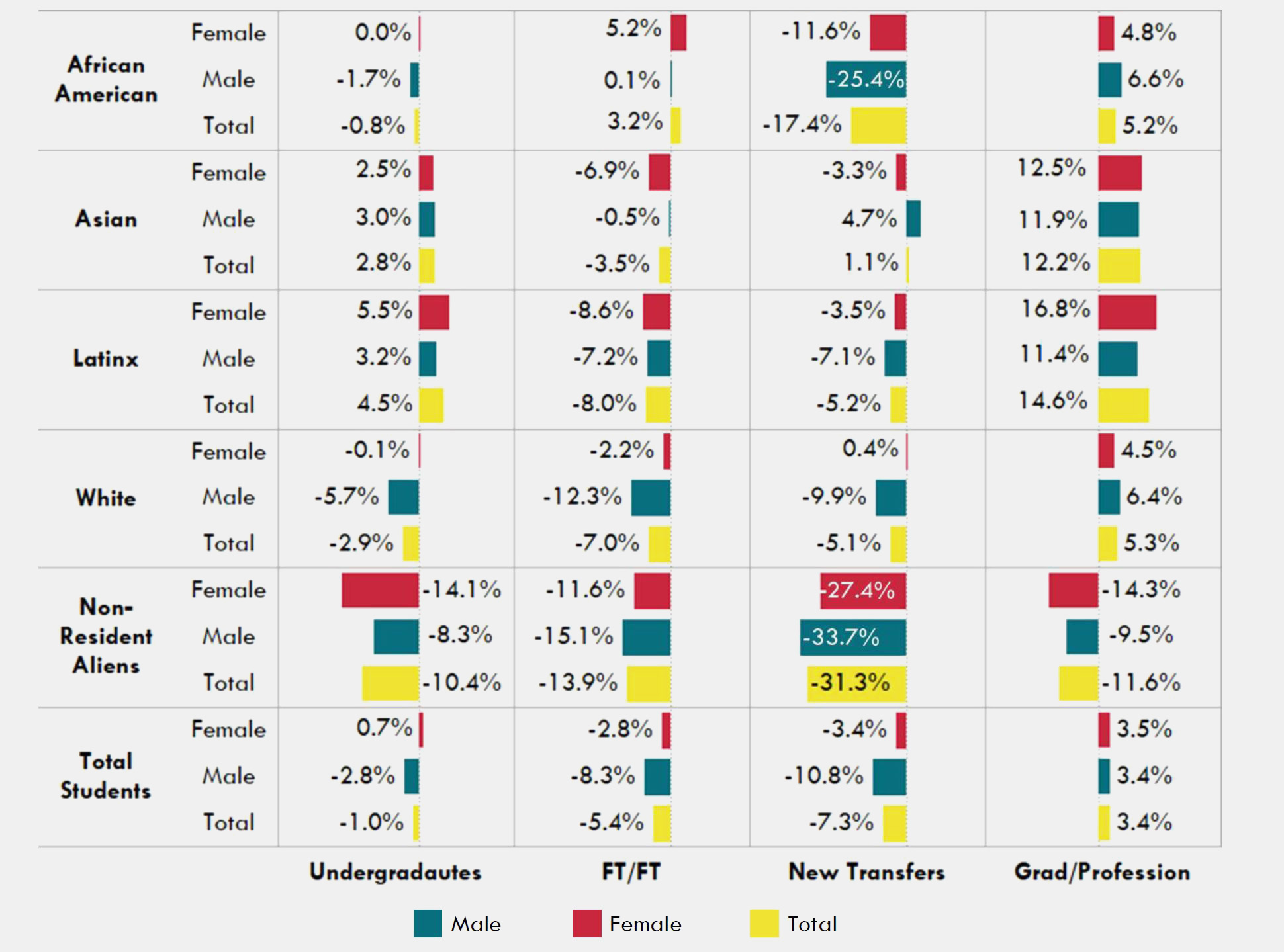 Technical Note:
For some of the public universities, the application of the operational definitions used in IHEIS for the fall 2019-20 information and the ways in which the first-look/preliminary data were collected and reported for 2020-21 do not perfectly align. Therefore, in certain instances, some of the sub-totals may be marginally different from how they are reported locally (e.g., new full-time transfer students). IBHE will continue to work with the public universities to resolve some of these minor definitional alignment issues as the data move from being first-look/preliminary to final.